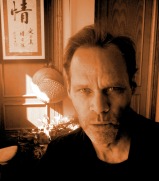 Curt Eriksen was born in Kansas, and grew up in the Midwest.  He received a Master’s Degree from the University of Maryland before abandoning a potential career in the nascent field of Economic Development—along with a life based in the United States—in order to become a writer.  An internship awarded by the U.S. State Department took him to Monrovia, Liberia, prior to the outbreak of the civil war there, a three month detour on his way back to Spain, where he had studied abroad as an undergraduate.  For the next twenty-seven years Curt lived in Europe, where he built a house above the village of Villanueva de la Vera, in Cáceres.

Since 2012 Curt has lived between Boston—where he received an MFA from Lesley University—and the Sierra de Gredos, in western Spain.

In 2015 Curt took his three kids to Tanzania with the idea of writing a piece of non-fiction based upon this once-in-a-lifetime family trip.  Instead he produced a story that won the 2016 Clay Reynolds Novella Prize.  A Place of Timeless Harmony will be published by Texas Review Press in the fall of 2017.

Curt has been studying, practicing and teaching the martial arts for over thirty years.  He is a certified Regional Instructor—or Entrenador Regional de Taiji Quan—with the Federación Española de Kung-fu, Wu-shu, Taiji y Qi Gong, as well as a certified Combat SAMBO Instructor and lifetime member of the United States Combat SAMBO Association.